A dedicated yoga studio in the heart of Falmouth

If someone said to you, define the universe, where would you start? Maybe with the stars, or maybe with the earth, ocean, creatures, humans. Or maybe your definition of the universe would be a little simpler, as it was for the elephant headed God, Ganesh, when he was challenged with this question.

Ganesh and his brother Skanda are fighting over who has the right to be the leader of their father, Shiva’s, army. Skanda is the God of War so he pretty much assumes he was made for this and Ganesha is a little rotund due to his love of sweet treats and has an elephant head (another story for another time) and so is probably drawing 100 to one in the stakes of whether he will get the job.

Shiva and Parvati are sick of the squabbling and so they call the boys in for a family sit down and Shiva issues them a challenge. “Whoever can run around the universe three times and arrives back to sit at our feet first will be the leader of my army.” 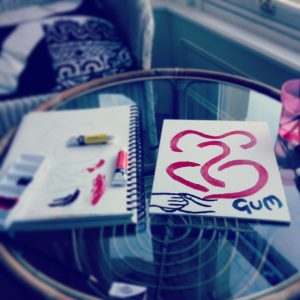 Well, Skanda has taken off before the sentence is even out of Shiva’s mouth. He is off and running. Skanda is fit, he’s fast, he’s determined. If there was a movie made about Skanda’s life, he’d probably be played by The Rock. He is running, panting, past the stars, moon, sun, earth, planets. The other Gods look on with respect as this running machine keeps on going, leaving sparks and smoke in his trail.

Meanwhile, Ganesha sits in the same spot at his parents feet eating a few sweets, slowly savouring each delicious mouthful. Shiva rolls his eyes in despair at his dessert-loving son making no effort to even attempt the challenge and Parvati tries to gently push her son into giving it a shot so he won’t be a complete laughing stock with all the other Gods. Ganesha sits and dreamily eats his sweets.

As Skanda is speeding around the universe on his last lap, Ganesha rises from his spot, stretches out his chubby limbs and slowly, deliberately, walks around his parents three times. As Skanda skids to a halt at his parents feet he is stunned to see Ganesha being awarded the prize. He is crowned the leader of Shiva’s army.

Skanda holds no ill will to his brother. After all he won the challenge with intelligence and integrity. Two highly desired skills for the leader of a great army.

Ganesha considered what the universe meant to him and it was his parents. Shiva and Parvati are his universe, they are the roots from which he was born, they gave him life, threw a few challenges his way and he grew and blossomed as a result.

Ganesha sits at the root chakra. The first of our chakras represents our connection to our roots. Yep, that means your relationship to your parents, your siblings, your heritage. It also represents your roots now, your sense of feeling grounded, connected to the earth and connected to those around you. And finally the root chakra is also about feeling supported, a roof over your head, food on your table, money in your pocket and friends/family to lean on.

In sanskrit the word for root chakra is muladhara. Mula = root, Dhara = support.

As yogis we often forget the importance of muladhara, instead focusing on the ‘sexier’ higher chakras that represent love, compassion, intuition, communication and spirituality (more on those in the coming weeks) but how can we hope to rise to those places of love for ourselves, a deep sense of inner wisdom, a connection with our own essence if we don’t start with our roots.

In every yoga pose known to man if we get the roots right, the support structure for the pose, then we feel freedom and expansion in the shape. If we forget about the roots of the pose, we will feel uncomfortable and unbalanced. And the same goes here.

I know its not fun to think about the support structure of your life and getting it in a good condition. But its so important. how much better do you feel when you know you are comfortable financially, that you have a friend to call on when things get tough, or simply that your cupboards are stocked and you’ve made that phone call to your Mum to see how she is doing.

My classes for the following week will all be focused on giving muladhara a little polish and the respect it deserves and my personal focus for this week is to spend some time thinking about my root support for the coming year, to get a few things in order and to go to Sainsbury’s and fill up my empty cupboards.

Ganesha knew the importance of his roots, the centre of his universe from which he then grew and expanded. Set down your roots now and feel the freedom in the rest of your life in the year ahead.

All the latest Falmouth Yoga Space news and events, straight to your inbox.

Happy International Day of Yoga . What is yoga to

Our level 1 300hr teacher training kicks off in Ja

Our monthly restorative class is this Friday night

Our next YTT starts in January 2023. The dates, pr

FLASH SALE INCOMING - for 24 hours only, from 7am

The cost of living crisis is downright scary (I pr